Back to Previous Section
Pokhra - the mesmerizing valley

Pokhra  lies on an important old trading route between Tibet and India. The city is located 200 km west of Kathmandu and at an altitude of 827 meters. Pokhra is one of the major tourist attractions in Nepal. It is very popular for its adventure tourism and the base for famous Annapurna circuit trek. Pokhra also serves as the headquarters of Kaski district, Gandaki zone and the Western Development region.
Three out of ten highest mountains in the world – Dhaulagiri, Annapurna I and Manaslu or Lamjung Himal are situated within 48 km ( Aerial distance) of the city. Due to proximity of the ranges from Pokhra, northern skyline offers a spectacular view of the Himalaya.
Pokhra valley is divided into five parts by the rivers Seti, Bijayapur, Bagadi and Fusre. Seti Gandaki riverflowing through the city from north to south divides Pokhra city into two halves. In the south the city borders on Phewa Tal (4.4 km2) at an elevation of about 827 m above sea level, and Lumle at 1740 m in the north of the city touches the base of the Annapurna mountain range.  Within the city there is a noticeable difference in rainfall between the south and the north of the city, the northern part of the city situated at the foothills of the mountains experiences proportionally higher amount of precipitation.  The porous underground of the Pokhara valley favours the formation of caves and several caves can be found within the city limits. With its tributaries the Seti Gandaki river have dug impressive canyons into the Pokhra valley floor, which are only visible from higher view points or from the air and they are stunning to behold. 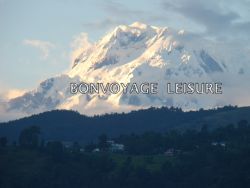 Pokhra has its  two major hilltops as its viewpoints to view the city and surrounding panaroma, World Peace Pagoda built in 1996 across the southern shore of Phewa lake and Sarangkot which is located northwest of the city.  Pokhra has number of Museums which are famous for their respective disciplines. International Mountain Museum (IMM) was opened for public in Ratopahiro to boost city's tourism attractions. Other museums in the city are Pokhara Regional Museum, an ethnographic museum, Annapurna Natural History Museum which houses preserved specimens of flora and fauna, and contains particularly extensive collection of the butterflies, found in the Western  region of Nepal; and Gurkha Museum featuring history of the Gurkha Soldiers.
The history of Pokhara city shows that proper settlement in Pokhara was initiated from Bindabasini  and Batulechour. In the 17. century it was part of the influential Kingdom of Kaski which again was one of the Chaubise Rajaya (24 Kingdoms of Nepal) ruled by a branch of the Shah Dynasty. Many of the mountains around Pokhara still have medieval ruins from this time. In 1786 Prithvi Narayan Shah added Pokhara into his kingdom. It had by then become an important trading place on the routes from Kathmandu to Jumla and from India to Tibet.
Until the end of the 1960s the town could only be reached by foot and it was considered even more a mystical place than Kathmandu. The first road was finished in 1968 after which tourism set in and the city grew rapidly. The area long the Phewa Lake developed into one of the major tourism hubs of Nepal. 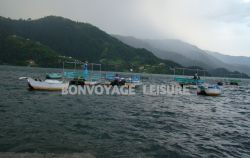 As being a cultural cradle of Western Region, Pokhara is the land of festivalswith rich cultural heritage of the people of Indo-Aryan as well as Mongoloid stocks. From the very beginning pokhara city was able to attract the people with in the country as well as the tourists. More than 90 percent cultural ceremonies and activities have religious origin.