Back to Previous Section
Kathmandu - The Capital of Nepal

Kathmandu is not only the capital city of Federal Democratic Republic of Nepal, but also the headquarters of the central region and the largest city of the country.
Kathmandu valley stands at an elevation of around 1400 meters abouve the sea level in a bowl shaped valley in central Nepal consisting tow sister cities – Lalitpur or Patan to its south and Bhaktapur or Bhadgaon to its east.
The cultural heritage The cultural heritage recognition under the World Heritage list of the UNESCO has recognized all the monuments in the three cities as one unit under the title “Kathmandu Valley-UNESCO World Heritage Site. Eight rivers flow through the city of which the Bagmati, Bishnumati, Dhobikhola, Manohara, Hanumant and Tukucha rivers are predominant.
Kathmandu city is the political, commercial and cultural hub of Nepal. The valley embraces most of Nepal's ethnic groups, but Newars are the indigenous inhabitants and the creators of the valley's splendid civilization. Kathmandu is the most  sought after destination in Nepal among the the tourist from all over the world. The city is dotted with whimsical charm of ancient temples, palaces, durbars, caves and several others fascinating attractions.
As per the mythology, Nepal is as old as Himalaya and a great lake filled the Kathmandu valley. Legend has its that the lake was drained by a thunderbolt thrown against the wall of the valley by Lord Krishna. Another legend claims that the lake was drained by the patriarch Manjushri, as he wanted to get a closer look at Swaymbhu or Adhi-Buddha, the beautiful flower on the lake. 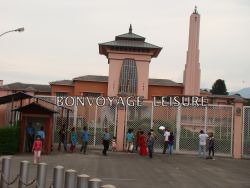 According to the history, the main inhabitants of Kathmandu valley are Neewar People. While the documented history dates back to Kiratis around the 7th Century B.C. Four stupas around the city of Patan are said to have been erected by Charumati, daughter of Ashoka the Great, a Mauryan king, in the 3rd century BCE attest to the ancient history present within the valley. The Lichavi Dynasty ruled the Kathmandu valley from 5th Century A.D.. The inscription on the walls of Changu Narayan Temple testify the existence of Lichavi Kingdom under King Manadeva I who ruled from 464 AD To 505 AD.  The Lichavis were succeeded by Mall Dynasty during 12 Century A.D., who ruled the Kathmandu valley upto mid of 18th century, when Gorkha King Prithvi Narayan Shah invaded the country in 1768. The shah dynasty ruled upto 2008 A.D.
The city of Kathmandu is named after a structure in Durbar Square called Kaasthamandap. In Sanskrit, Kasth means  "wood" and Mandap means  "covered shelter."  This unique temple, also known as Maru Satal, was built in 1596 CE by King Laxmi Narsingh Malla. The entire structure contains no iron nails or supports and is made entirely from wood. Legend has it that the timber used for this two story pagoda was obtained from a single tree. 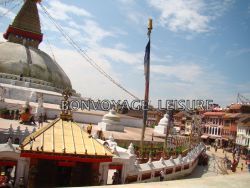 Kathmandu has a very charm for religious people also. The valley has numerous Temple, Buddha Stupa and religious places. Among them Pashupatinath as one of most important religious site for Hindus, Baudhanath as one of the largest Stupas in South Asia, Swayambhunath is considered to be more than 2500 years old, Durbar Square the former residence of the king and many others.