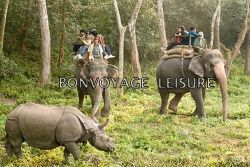 Nepal is a land of unique topography with extreme contrast in climate and geography. The landmass covers from low area with sub tropical jungles to arctic condition in the Himalayan highlands. Within a short distance of 150 Km, the land rises from near sea level in south to 8848 meter in the north. This together with the monsoon rainfall along the south facing slopes, has resulted in compacting virtually all climate zones found on planet Earth. As a result, Nepal has been endowed with a great diversity of life-zones providing a home for a large variety of plants, birds and animals.
Chitwan National Park is located in sub-tropical inner Terai lowlands of south Central Nepal in the Chitwan district. It is the first National Park in Nepal and covers an area of the 932 sq. km. Chitwan National Park is established in 1973 to preserve an unique ecosystem significantly valuable to the whole world. The park has  gained much wider recognition in the world when UNESCO included this area on the list of World Heritage Site in 1984.
Chitwan National Park in altitude covers from 100 meter in the river valley to 815 meter in Churia hills. The park’s headquerters is located in Kasara. Chitwan National Park consists of churia hills, Ox-bow lakes and flood plains of Rapti, Reu and Nararayani  rivers. The low but most rugged Someswar hills occupies most of the western section of the park. The flood plains of Chitwan are rich alluvial. The park boundaries have been delineated by the Narayani and Rapti rivers in the north and west, and the Reu river and Someshwor hills in the south and south-west. It shares its eastern border with Parsa Wildlife Reserve.
Formerly the Chitwan valley was well known for big game and was exclusively managed as a hunting reserve for the Rana Prime Ministers and their guests until 1950. In 1963, the area south of Rapti was demarcated as a rhinoceros sanctuary. In 1970, His late Majesty King Mahendra had approved in principle the creation of Royal Chitwan National Park. 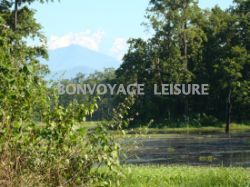 The chitwan valley is characterized by the tropical and sub-tropical forests. The park is dominated by almost monotypic stands of sal forest which occupy 60% of the total area and is a remnant of the lowland Terai forest which once stretched across the foothills of the Himalayas through India and Nepal. Riverine forest and grasslands form a mosaic along the river banks are maintained by seasonal flooding. On the hills are pines and scattered palms, and moister slopes support bamboos.
The Chitwan National Park is home to at least 43 species of mammals. The "King of the Jungle" is the Bengal Tiger. The alluvial floodplain habitat of the Terai is one of the best tiger habitats anywhere in the world. Leopards are most prevalent on the peripheries of the park. They co-exist with tigers, but being socially subordinate are not common in prime tiger habitat.
The Terai lowlands are defined by a belt of well-watered floodplains stretching from the Indian border northward to the first slopes of the Bhabhar and the Siwalik Range. This is the richest habitat in the land with tall grasslands interspersed with riverine.
Apart from Royal Bengal tiger and Leopard, there are more than 43 species of mammals in the park. The park is specially renowned for the protection of the endangered one-horned rhinoceros, gharial crocodile along with many other common species of wild animals. The estimated population of endangered species of animals such as gaur, wild elephant, four horned antelope, striped hyena, pangolin, gangetic dolphin, monitor lizard and python, etc.

There are over 450 species of birds in the park. Among the endangered birds found in the park are Bengal florican, giant hornbill, lesser florican, black stork and white stork, Few of the common birds seen are peafowl, red jungle fowl, and different species of egrets, herons, kingfishers, flycatchers and woodpeckers. The best time for bird watching is March and December.
The park is actively engaged in the scientific studies of several species of wild flora and fauna.