Back to Previous Section
Lumbini - The birth place of Lord Buddha 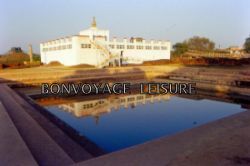 Lumbini, the Buddihst pilgrimage site is located about 22 km. from Bhairahawa (Siddharthanagar), below the Churia range, 24 km. south from the foothills of the Himalayas, on the western bank of Telar river in Rupandehi district of Lumbini zone in Nepal. Lumbini is the place where queen Madhavi, the wife of King Suddhodana of the Shakya dynasty belonging to the Ksatriya or Warriors’ class, gave birth to Siddhartha Gautama on the full moon of the month of Baisakh in 642 B.C, who as the Buddha Gautama founded the Buddhist tradition. The beauty of Lumbini is described in Pali and Sanskrit languages. It is also said that Maya Devi was also speel bound to see the natural grandeur of Lumbini. Lord Buddha lived in Lumbini until the age of 29.
The earliest Pali text Suttanipata has mentioned that, "The wisdom- child, that Jewel so precious, which can not be matched, has been born at Lumbini, in the Sakya land for well being and joy in the world of men". The name of the site is spelt Lumminigame and Lumbini Vana in the Asokan pillar Edict still standing at the same place.
In 1996, an archaeological dig unearthed four stupas and a stone pillar with a figure of a horse on top.placed there by Ashoka in 249 BC to mark the precise location of the Buddha's birth more than 2,600 years ago.
It is said in the Parinibbana Sutta that Buddha himself identified four places of future pilgrimage: the sites of his birth, enlightenment, first discourse, and death. All of these events happened outside in nature under trees. While there is not any particular significance in this, other than it perhaps explains why Buddhists have always respected the environment and natural law.
Lumbini was a site of pilgrimage until the 15th century AD. Its early history is well documented in the accounts of Chinese travellers, notably Fa Hsien (4th century AD) and Hsuan Tsang (7th century AD), who described the temples, stupas, and other establishments that they visited there. In the early 14th century King Ripu Malla recorded his pilgrimage in the form of an additional inscription on the Ashoka pillar. The reasons for its ceasing to attract Buddhist pilgrims after the 15th century remain obscure.
Lumbini remained neglected for centuries. In 1895, Feuhrer, a famous German archaeologist, discovered the great pillar while wandering about the foothills of the Churia range. Further exploration and excavation of the surrounding area revealed the existence of a brick temple and a sandstone sculpture within the temple itself which depicts the scenes of the Buddha's birth.
Today the holy site is being developed with international support as the supreme Buddhist pilgrimage and a symbol of world peace. The shrines and monastries that many countries have built or are still building reflect the architectural traditions of the respective countries, and thus giving Lumbini an international feel with a message of universal friendship and brotherhood.
The place itself is interesting as a whole, the landscapes and the green forestry. However Maya Devi temple and the Stupas and the Pillar built by Ashoka are really worth a visit. Recently, several beautiful shrines have been constructed by devotees from all over the world. A visit to Lumbini is not only for spiritual enlightenment but also for solace and satisfaction that one gets in such a calm and peaceful place.