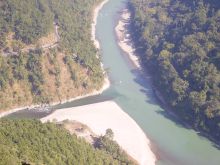 Sikkim is a  completely hilly state is having a variation of elevation in the range of 440 mt to 8540 mt. and measures about only 110 km from North to South and 64 km from East to West with three international boundaries, Nepal (100kms border line ), Bhutan (30 kms border line) & Tibet (220 kms border line ).  In the year 1975 through a general election Sikkim had been included as 22nd state of India.

Despite having 0.22% land of the country it boasts for rich flora & fauna with beautiful streams, waterfalls, spring, lakes, glaciers & mountain peaks. Mighty river Teesta which is the lifeline of this state cuts through Sikkim from North to South makes the state more beautiful. 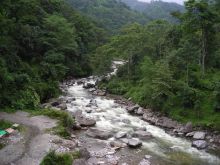 Sikkim plays a very important role for the growth of tourism in India. Politically Sikkim is divided into four major districts East West, North & South. But each state is having the same importance from tourism point of view. One thing always should keep in mind for Foreign National Tourists as  they required special Inner line Permit for maximum Fifteen Days issued from Indian Embassy or Government of Sikkim. Roaming in this tiny hilly state is very easy and safe, even visitors can walk around with their family 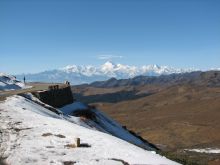 in the night. People are very helpful and simple.

Gangtok Information, Gangtok Tour Package under Sikkim Tour, places to visit in Gangtok - Capital of Sikkim    Gangtok is accessible from Siliguri by road only & situated at an altitude of 5,047 ft.  Its 125 kms and 3 ½ hrs journey. Journey to Gangtok is really beautiful through straightway and very few ups & downs or zigzags      accompanying by river Teesta more than halfway. ... [+] Read More

North Sikkim - Switzerland of India North Sikkim is now one of the most traveled destinations of India. It is nestled in the high hills, forests, glaciers and snowy mountains; it’s simply a place which any one can remember throughout the life.  The gate way of North Sikkim is Gangtok.  Number of beautiful falls, some are flowing on road, flowers and the beauty of the hills will not allow any one to close their eye. Glimpses ... [+] Read More

Pelling Information, Pelling local sightseeing, Pelling Tour Packages    This small beautiful town in West Sikkim is situated at the height of 6840 ft. and the last motorable destination towards Mt. Kanchenjunga, the third highest peak in the world. Due to its unique location Pelling is an ideal place for nature lovers and is famous for its superb scenic beauty which is impossible to describe in words but requires to  ... [+] Read More

Yuksum - Gate way of adventure Yuksum, a small remote village of West district was the birthplace of Sikkim's Buddhist Civilization, situated at an height of  1780 mt and was the first Capital of  Sikkim.  Yuksom literally means “ meeting point of three lamas”, witnessed the coronation of Phuntsog Namgyal, the first Chogyal ( religious king) of Sikkim in 1641 AD by three venerated Lamas who came from North, ... [+] Read More

Varsey – Rhododendron Sanctuary Varsey – a small valley on the Singalila Range in West Sikkim amidst variety of colourful Rhododendron trees which are in all shapes & shades, situated in the extreme point of  West Sikkim and at an altitude of 10,500 ft  - is a nature’s gift. Colour riot in the forest which spreads over 104 sq. kms is ablaze with bright rhododendron flowers with hues ranging from bright ... [+] Read More

Hee-Bermiok – Hidden Treasure Hee-Bermiok – bounded by Kalez Khola in the North, Hee Khola in the West, Rengit & Ransang rivers in the East and Samdong reserve forest in the South is a newly discovered hidden treasure in Sikkim. Breathtaking view of mighty Kanchenjunga massif looking on the North mesmerized people. There is no specific view point to visit, but walking or riding a bike through   Varsey Rhododendron ... [+] Read More

Uttarey – Gateway to Singalila A 40 mts journey from Dentam village, Uttarey is a base camp for Singalila Range Trekking. There are number of trek routes originate from Uttarey, among them Uttarey – Varsey, Uttarey – Chiwa Bhanjan are famous. There is no particular sight seeing spots are here in Uttarey but it offers spectacular beauty of its own. Spending a night or two will be memorable. ... [+] Read More

Aritar : Gateway to Old Silk Route Tour or Zuluk Tour   Aritar - a small village  isolated from the rest of the state is located in the East Sikkim, under Rongli Sub-Division is famous for its lush green forests, mountains and beautiful natural landscape. A newly built lake called Aritar Lake or Lampokhri is a popular tourist destination with boating facility – which has been introduced for the first time in Sikkim. ... [+] Read More

Kaluk (Rinchenpong) – Nature’s Paradise Kaluk/Rincehnpong – yet to become a very popular tourist spot is enriched by abundant natural beauty and offers peace in mind.   Located  at an height of 5600 ft in the buffer zone area of  Varsey Rhododendron Sanctuary  in West Sikim is a paradise for nature lovers, conservationists, botanists, zoologists and environmentalists.   The area of Kaluk ... [+] Read More

Ravangla – A Sleepy Hamlet Ravangla Tour, Places to visit in Ravangla   Ravangla – a small sleepy hamlet on Gangtok – Pelling  Hihgway at an elevation of around 8,000 ft. on the ridge between Meanam & Tendon hills is becoming a new tourist hot-spot in South Sikkim, owing to its magnificent view of mountains & serenity. Cluster of snow capped mountains including Mt. Kanchenjunga, Mt. Pandim, ... [+] Read More

Namchi – Sky High Namchi – meaning “ Sky High”, nestled among the hills and situated at an height of 5500 ft above the sea level. It is a small town and head-quarters of South District with immense potentialities of all round tourist activities. It is becoming a major tourist attraction in Sikkim for its superb panoramic view of snow clad mountains and vast stretches of valley. Namchi is well connected by road from ... [+] Read More