At an height of around 17,000 ft. , surrounded by snow capped mountains and alongside a glacial peak which is known by the same name, Gurudongmar Lake is one of the highest lakes in the world. This milky white lake is one of the most sacred for both Sikhs and Buddhist people and number of pilgrimage come every year to offer their prayer. 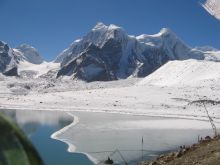 Gurudongmar Lake lies in a high plateau on the northern side of Kanchenjunga range and adjacent to Tibetan plateau, close to India – Tibet ( China) border.

Gurudongmar Lake is one of the source stream  of river Teesta. Close to the lake there is a “Sarbar Dharma Sthal ( House of worship for all religions)” which was built by Govt. of Sikkim.

Due to the extreme inhospitable terrain and difficulties associate with reaching the lake, handful of people visit this place every year. This area is full controlled by Indian Army and access to this lake is strictly monitored by them at the check-post located at Giagong. Owing to the altitude, there is a scarcity of Oxygen. Gurudongmar Lake is worth visit for its beauty and natural slendor. Visiting this lake is permissible only for Indian Nationals.