Jayanti in Dooars is a picturesque village at Buxa Tiger Reserve. Jayanti village may be the only place in India where visitors can spend overnight and enjoy the jungle in the core area of a Tiger Reserve forest. A beautiful place along with the meandering Jayanti river forming a natural border of Bhutan is one of the last destinations in Dooars which is till untouched by mass tourism. 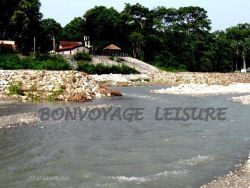 Often termed as the “Queen of Dooars,” Jayanti is surrounded by heavily forested area is inside of the famous Buxa Tiger Reserve known for its tigers, leopards, elephants, deer, peacocks and the historic Buxa Fort and Mahakal cave. Encircled by dense forest and forested hills, soothing sound of Jayanti river blending with the chirping birds simply make to rejuvenate tired soul. A wide open Jayanti river bed is an added attraction with the lush green Jayanti hills stand erect standing on  the opposite side of  Jayanti village. From the Jayanti river bed breathtaking view of Bhutan hills is really enthralling. The combination of dense forest, Himalayan mountain ranges and Jayanti river make Jayanti like a picture postcard beauty. Walking through Bala river bed which comes just before entering Jayanti is an ideal place to watch birds, mainly  peacocks. But venturing alone is risky as Bala river bed is also a favourite place for roaming of wild animals like leopards, elephants etc.

Getting Jayanti / How to reach in Jayanti in Dooars :

Places to visit in Dooars around Jayanti - Buxa Tiger Reserve  ( Pls. Click on the link)