Information of  Thimpu- Bhutan, places to visit in Thimpu

Thimpu has been  a  small and beautiful capital city of Bhutan since 1961, sprawling on the banks of Wang Chu or Thimpu Chu and the surrounding hills and situated at an altitude of 7800 ft. This is the hometown of Bhutan’s Royal Family with number of Government Office and headquerters of number of internationally funded development projects.

Thimpu is developing rapidly with the number of Shops, Restaurants, Shopping Arcade and Public  Buildings are coming up to face lift of the city. But by regulation all the buildings are to be designed in traditional Buddhist stype and paintings. Although the city is crowded by concrete structures, but the beauty of the city still remains attractive.

As a capital city Thimpu is far away from the hectic lifestyle and polluted atmosphere of other capital cities in the world and famous for its untouched natural beauty. It is full of pure air and unblemished habitats fiercely protected by its people. Another interesting fact of the city is that it is the only capital city in the world that doesn’t have a single traffic light .

Thimpu weather remains soothing during summer time. Temparute hovers around 10-25 degree. But during winter the city becomes very cold and sometimes experiences mild to heavy snowfall. Thimpu temparute comes down heavily and stays around -6 to 15 degree.

National Memorial Chorten is a large Tibetian style memorial building and is dedicated to the third King of Bhutan, H.M. Jigme Dorji Bhutia, who is also addressed by “ The father of the modern Bhutan”. The plan of erecting a memorial for the peace and prosperity of the world was actually King Jigme Dorji’s idea. But due to his sudden death in 1972, his wish became unfulfilled. In 1974, his dream monument was constructed by the Royal family and the Cabinet to fulfill his wishes. This monument is full of finely executed religious wall paintings which provide the deep insight into Buddhist Philosophy.

National Library built in the style of traditional temple in the year of 1967 holds a large collection of Buddhist Texts and Manuscripts mostly in block printed format, some are dating back several hundred years as well as modern academic books mainly on Himalayan Culture, Religion and neighbouring countries. It also contains a copy of the “Largest  Published Book” in the world.

On the bank of Thimpu Chu, Tashichchodzong – “The Fortress of the Glorious Religion”, was built by Shabdrung Ngawang Namgyal in 1641 and later reconstructed by the King Jigme Dorjee Wangchuk in 1962. This is the centre of Government and Religion, site of Monarch Throne Room and the summer residence of the Je-Khenpo or Chief Abbot of Bhutan.

The annual 5 day Thimpu Tshechu festival is celebrated here in Tashichchodzong in autumn. During this festival Tashichchodzong is open to visitors and while the monk body is resident in its winter quarters at Punakha Dzong.

Next to Tashichchodzong a nine holes circuit golf course is located.

On a visit, one can watch students learning and honing skills taught at the school.

Semtokha Dzong – officially known as Sangak Zabdhon Phodrang ( Palace of the Profound meaning of Sacred Mantras) stands on a low ridge 08 kms down from the Thimpu valley. Semtokha Dzong was the the first Dzong built in Bhutan by Shabdrung Ngawang Namgyal  in 1627.
The Institute of Cultural Studies is located here. The most fascinating artistic feature of this Dzong is the series of over 300 finely worked slate carving behind the prayer wheels in the courtyard. - 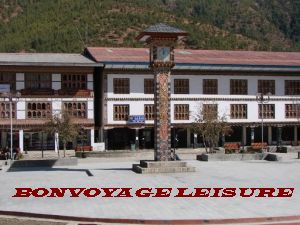 These two Museums, both were opened in 2001 provide  unique insights into Bhutanese material culture and the way of life.

Apart from Handicraft Emporium ( Run by Government), a wide varieties Handicrafts Emporium(run by the Government) and many smaller crafts shops around the town provides a wide variety of hand woven textiles and other craft products which are available for purchase.