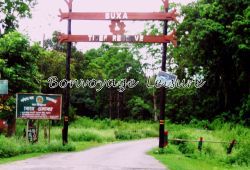 Buxa Tiger Reserve is also famous for the Buxa fort which is locate at an altitude of 867 mt above the sea level and was used as a prison for Indian Freedom Fighters during British rule. Main rivers of Buxa Tiger Reserve forest are Sankosh, Raidak, Jayanti, Churnia, Turturi, Phashkhawa, Dima and Naroni.